Private tour: Paris at the time of Gauls and Romans costumed tour for children 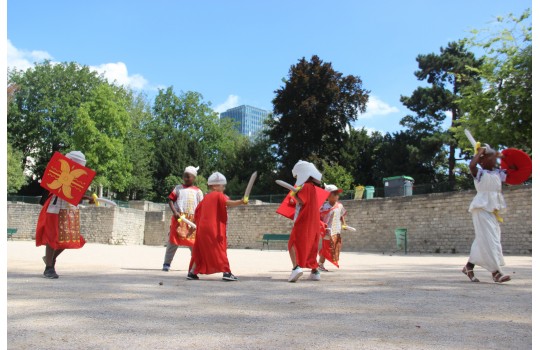 chevron_left chevron_right
Explore the legendary city of Lutetia in the time of the Gauls and the Romans in a costume tour that will delight young and old alike.
Rendez-vous : Next to the kiosk, metro station Jussieu (lines 7 and 10)
€149.00 private group
give this tour
Visite privée

Explore the legendary city of Lutetia in the time of the Gauls and the Romans in a costume tour that will delight young and old alike.

In 50 BC all Gaul is occupied by the Romans, all? Yes, and Paris is no exception to the rule!
The city of Lutetia gradually developed during the 1st century in what later became the Latin Quarter.
This oldest part of the city reveals its secrets for a tour around the Roman remains. From the arenas of Lutetia serving as a battlefield for the gladiators, to the famous thermal baths of Cluny, ancient baths used by the Roman citizens, this costumed tour for children will show you Paris from another angle and in a fun way and that will enthrall all the family.
Costumes are lent to the children to setting out to explore the Corridors of Time.

"A bene placito, by Toutatis and Cernunos!"

What you get from this experience:
- An ideal route to discover Paris to the children
- Discover the city of Lutetia as you have never seen it before
- Complete Roman and Gallic costumes on the tour for a better immersion in history (6 to 11 years)